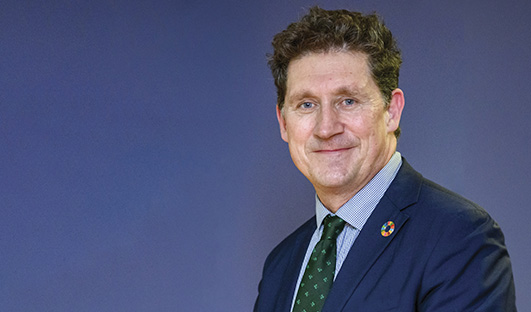 With the transport sector accounting for 20 per cent of CO2 emissions in Ireland, it is vital to ensure that the sector experiences fundamental change if Ireland is to reach its net zero commitments, Transport Minister Eamon Ryan TD highlights, calling it an “unprecedented challenge but one we cannot ignore”.

Transitioning Ireland’s transport system comes with the advantage of reducing the country’s dependence on imported oil and gas, the Minister outlines, adding: “Ireland, as one of the most import-dependent countries in the world of fossil fuels, has to make that key switch towards renewable-powered vehicles.”

The Government’s plan to solve the housing crisis is a significant factor in reimagining Ireland’s transport network. He explains that the plan to do this requires more balanced regional development, guided by the National Planning Framework, which will lead to further investment in the greater Dublin area, as well as a sharp increase in investment in Cork, Galway, Waterford, and Limerick, with compact development in the smaller cities, as well as rural areas, key to achieving this.

“Compact development is something that is going to require the leadership of the Department of Transport, in what we are calling ‘transport-led development’, where you provide the public with transport infrastructure, particularly in advance of any new housing development,” he asserts.

“If we can reverse volume of travel, and adopt remote working patterns in a way that works for everyone, then we can make transport more sustainable.” Transport Minister Eamon Ryan TD

This will require the Government to give “key indicators to local authorities” to ensure the sustainability of the transport modes around any new housing developments, whilst advocating that new housing should be built “closely to the centre of existing settlements” in order to reduce costs in electricity, water treatments, and reliance on private cars as a mode of transport.

The first change is a switch away from petroleum products, and towards electricity and biofuels for private vehicles, as well as for the haulage and freight system.

“Whether it is through hydrogen, electric, biofuels, compressed air, or any other means which may evolve and develop, one thing is clear, we need to switch away from combustible fuels.

“It is increasingly clear that the European Union is likely to put a deadline, probably around 2035, where there will be no new combustion engine vehicles produced. We will switch to electric; it is happening,” he says.

With it being “clear” that “electric vehicles are going to be the dominant mode”, Minister Ryan promotes this prospect as a means of ensuring Ireland’s energy security, and points to his department’s order of 120 electric-powered buses as a beacon for the future.

Shifting reliance away from private car-based transport modes, and towards increased use of public transport and active travel are a crucial component of Minister Ryan’s radical plan for the transport system.

Whilst acknowledging that “it will be a difficult switch to make”, the Minister explains that it is necessary as “the development patterns that we have allowed to take place over the last four or five decades very much tends towards a private car dominated system”.

As part of this shift, Minister Ryan says that there will be “significant ramping up” of rail-based solutions like the Metro in Cork, Galway, Limerick, and Waterford, as well as an increase in the “similarly critical” BusConnects projects in each of the cities.

As a model for increasing the use of active travel, the Minister points to the Netherlands and Denmark as “countries with similar climates, economies, and of similar size”, which can be emulated.

“If we can follow the path that they have taken in terms of safer spaces for people to walk and cycle, we will see a response in Ireland with similar levels of active travel participation.”

Minister Ryan cites the need to reduce the volume of transport as the most important switch to be made as, in spite of any switch in fuel or infrastructure which may take place, Ireland will not meet its climate targets without a reduction in the volume of transport, thus necessitating a “more economical and efficient system”.

To achieve this, the Minister reiterates the 15-minute city and town concept, whereby all housing is situated within 15 minutes walking distance from the centre of a settlement, with the intention of reducing commutes.

The Minister further outlines that remote working should become a more regular feature for Irish workers. “If we can reverse volume of travel, and adopt remote working patterns in a way that works for everyone, then we can make transport more sustainable,” he insists.

Increasing shared transport is the fourth and final prong to Ryan’s plan, with the Minister explaining: “If we can develop alternate systems; car sharing, scooters or bicycles, I think there are new opportunities with the rising viability of electric transport alternatives to meet our transport needs.”

Concluding with reference to the National Climate Stakeholders Forum, the Minister says: “We present work in an open and transparent way, and hopefully to inspire others to go for it, particularly in the local authorities, which is where I think the transport revolution is going to have to take place.”