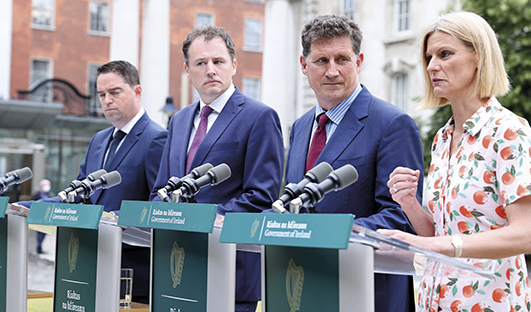 After months of political negotiation, the Government signed off on its sectoral emissions ceilings plan to 2030 in late July 2022. The plan increases targets for renewable energy generation, but has been criticised for not fully meeting the 51 per cent target for greenhouse gas reduction by 2030.

The Government published its ceilings for seven economic sectors in July 2022 after months of negotiating and speculation, primarily regarding the greenhouse gas emission target that would be set for the agriculture sector. The targets set were said by government to be “challenging, appropriate and fair for all sectors”, but designed to “protect farm incomes, business and household living standards”.

The Government, in its publication of the targets, which were mandated under the carbon budget programme, said that the overall target of 51 per cent reduction of CO2 emission by 2030 would “only be met if all sectors work together”, although as has been noted by figures such as Climate Change Advisory Council Chair, Marie Donnelly, the figures, if achieved, would only amount to a 43 per cent reduction. Donnelly also critiqued the lack of a “really detailed action plan”, while the Natural Environment Officer of An Taisce, Elaine McGoff, stated that the Government seemed to be “relying on technological solutions to address that [8 per cent] gap later in the decade”. The Government, however, states that 5.25 MtCO2eq of annual emissions are “currently unallocated on an economy-wide basis” for 2026-2030 and that these “will be allocated following a mid-term review and identification of additional abatement measures”.

Carbon budgets and targets by sector

Mandated by the Climate Action and Low Carbon Development (Amendment) Act 2021, the Climate Change Advisory Council proposed Ireland’s first carbon budget programme for the period between 2021 and 2035. This programme was published and submitted to the Minister in October 2021. Following review by the Joint Oireachtas Committee on Environment and Climate Action, the programme was subsequently adopted by government in February 2022 and approved by the Houses of the Oireachtas in April 2022.

The sectoral ceilings set by the Government concern seven sectors: electricity; transport; commercial and public buildings; residential buildings; industry; agriculture; and others (F-gases, petroleum refining, and waste). The reduction targets set for these industries range from 75 per cent (electricity) to 25 per cent (agriculture), set against 2018 levels of emissions. As well as having to cut the most amount of its emissions by proportion, the electricity sector will be required to cut the most by overall million tonnes of carbon dioxide equivalent (MtCO2eq).

The agriculture sector, crucial to the reduction of greenhouse gas emissions in Ireland given that it accounted for 37.3 per cent of all emissions in 2020, will be required to reduce its emissions by at least 5.75 MtCO2eq from 2018 levels in order to comply with the new government ceilings. “Crucially, the changes for agriculture will be voluntary and will allow farmers to play their part,” the Government said upon announcement of the ceilings. “There will be generous financial incentives in return with an additional financial package in Budget 2023.”

One sector closely linked to agriculture that has not had its sectoral emissions ceiling set is the land use, land use change, and forestry sector, which has had the setting of its ceiling deferred for 18 months in order to allow for the completion of the Land-Use Strategy. The sector’s emissions for 2018 stood at 4.8 MtCO2eq, and the Climate Action Plan 2021 has proposed a reduction of between 37 per cent and 58 per cent for the sector.

The SEAI’s breakdown of Irish greenhouse gas emissions states that the biggest source of greenhouse gas emissions is the “non-ETS sector”, meaning companies and bodies not included in the Emissions Trading System. This sector, which includes the burning of fossil fuels in home and by cars, accounted for 39 per cent of all greenhouse gas emissions in 2020, accounting for 49 per cent of all non-ETS emissions, with agriculture accounting for 47 per cent. The achievement of the overall reduction of 12 MtCO2eq in the electricity, transport, and domestic buildings sectors, all so heavily reliant on the burning of fossil fuels, will thus be central to the achievement of the reduction targets laid out by the Government.

Decarbonising the relevant sectors without significant drops in living standards will, of course, require the widespread provision of renewable energies as replacements for fossil fuels. As such, the agreement on sectoral emissions ceilings also contains within it agreements to increase Ireland’s renewable energy ambitions in the period until 2030.

The plans have more than doubled the target for solar power to 5,500MW by 2030, increased the offshore wind capacity target from 5,000MW to 7,000MW by 2030, pledged an additional 2,000MW of green hydrogen by 2030, and up to 5.7 TWh of biomethane as part of additional resourcing of agro-forestry and anaerobic digestion.

In March 2022, Minister for the Environment, Climate and Communications Eamon Ryan TD invited applications for the first batch of maritime area consents (MACs) under the Maritime Planning Act. The projects invited were those designated “relevant projects” in 2020: Oriel Wind Park, Bray and Kish Banks, Codling Wind Park I and II, Fuinneamh Sceirde Teoranta, and North Irish Sea Array. Relevant status projects are expected to deliver a capacity of circa 4.5GW by 2030, meaning that the State will now be looking to cultivate an extra 2.5GW in order to reach its newly set targets.