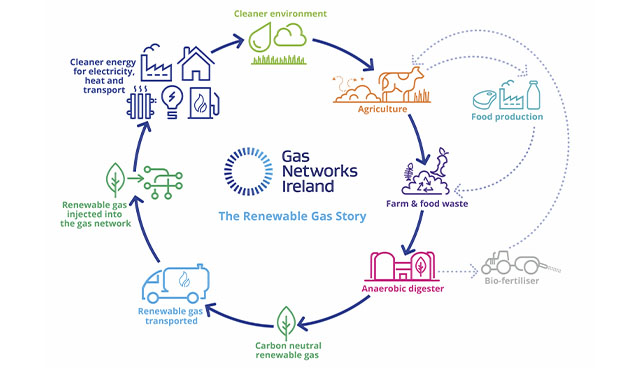 Gas network of the past, present and future

Ireland’s €2.7 billion, 14,617km national gas network is considered one of the safest and most modern gas networks in the world, securely supplying more than 30 per cent of Ireland’s total energy, including 40 per cent of all heating and almost 50 per cent of the country’s electricity generation.

In the past, the gas network brought town gas to Irish homes. This gas of the past was produced in gasworks plants around the country by burning coal.

The gas network is now preparing to transport the gases of the future; cleaner, renewable gases such as hydrogen and biomethane, that will enable Ireland to meet its climate action targets in the most cost effective and least disruptive way.

“A net-zero carbon gas network will reduce emissions across a number of key sectors, including those that are traditionally difficult to decarbonise, such as transport, agriculture, industry, heating and reliable power generation.

“With learnings from across Europe and the UK as well as insights from our own research and development facility, we’re preparing to transform the gas network and ultimately Ireland’s entire energy system to deliver a cleaner energy future in line with national and EU policy.”

Ireland must enhance and diversify its energy supply

The conflict in Ukraine has highlighted the need to enhance and diversify Ireland’s energy security through the development of a domestic renewable gas industry.

The European Commission’s new RePowerEU plan released on 8 March aims to reduce the European Union’s dependence on Russian fossil fuels by diversifying gas supplies and speeding up the roll-out of renewable gases.

This was followed days later by a letter to the Taoiseach from Ibec asking the Government to support the development of hydrogen and biomethane projects to both enhance the country’s energy security and provide opportunities to create a renewable gas industry in rural Ireland.

“We strongly agree with both the European Commission and Ibec’s positions on progressing the development of hydrogen and biomethane projects to both enhance the country’s energy security and create a sustainable renewable gas industry in Ireland,” Kelly said. 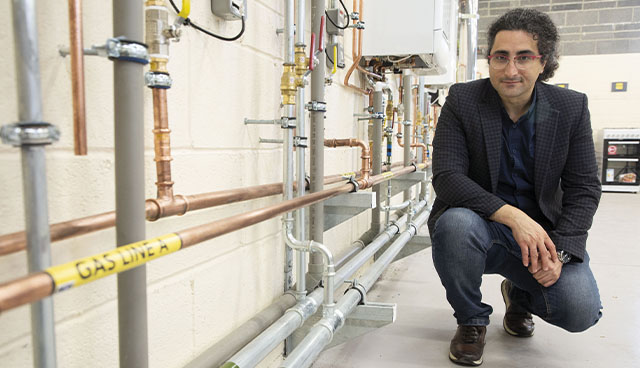 Ali Ekhtiari from University College Dublin’s Energy Institute (UCDEI) is part of the research team working with Gas Networks Ireland at their new research and development facility in Dublin.

Biomethane will decarbonise agriculture and energy

Biomethane is a carbon-neutral renewable gas that can be made from farm and food waste through a process known as anaerobic digestion. It is fully compatible with the existing national gas network and appliances, technologies, and vehicles, meaning no expensive retrofitting is required.

A large domestic biomethane industry would support the decarbonisation of the gas and electricity networks and all homes and businesses connected to them, and significantly reduce emissions in the agricultural sector.

It would also provide new income opportunities for local communities from the sale of the biomethane produced, the sale of crops fed into the anaerobic digestion process and the sale of the highly effective organic bio-fertiliser digestate that is a by-product of the process.

The Sustainability of Biomethane Production in Ireland report produced by Devenish Nutrition and KPMG Sustainable Futures in October 2021, concluded that agriculturally produced biomethane can be delivered sustainably and at scale to decarbonise Ireland’s energy system, without reducing the national herd, disrupting food production, intensifying agricultural activities, or impacting on biodiversity.

“Along with playing a key role in meeting national and EU climate action targets and making us less reliant on fossil fuels, there is significant scope for biomethane production in Ireland,” Kelly said.

“As far back as 2016, the European Commission identified Ireland as having the highest potential for biomethane production per capita in Europe.

“A domestic biomethane industry will decarbonise agriculture and our economy, while also facilitating sustainable circular economies, with food and beverage businesses for example powering their operations with renewable gas made from their own waste.”

Hydrogen is a carbon free gas that can be made from renewable electricity through a process known as electrolysis and stored until needed, making it an attractive option to decarbonise Ireland’s energy system and a strong example of how greater integration between Ireland’s gas and electricity networks can support a low carbon economy.

While there is currently no hydrogen on Ireland’s gas network, it is believed blends of up to 20 per cent hydrogen could be transported on the existing infrastructure today.

Embraced in the UK and across Europe, hydrogen is a critical component of the European Green Deal and recognised by the European Commission as offering “a solution to decarbonise industrial processes and economic sectors where reducing carbon emissions is both urgent and hard to achieve”.

Gas Networks Ireland recently completed construction of a research and development facility in Dublin to develop a detailed hydrogen technical strategy and ensure that the existing gas network is capable of safely transporting and storing both blended and 100 per cent hydrogen into the future.

Dr Ali Ekhtiari from University College Dublin’s Energy Institute (UCDEI) is part of the research team working with Gas Networks Ireland to test the operation and performance of household appliances with varying levels of hydrogen and natural gas blends.

“Ireland has already transitioned to a cleaner gas once before, from the old town gas, which was a combination of hydrogen, carbon monoxide and methane, to natural gas in the 1980s.

“Ireland has a head start on this next chapter of transporting new low and carbon zero gases thanks to having one of the safest and most modern, renewables-ready gas networks in the world,” Kelly said.

“Ireland’s gas network is a national decarbonisation solution of size and scale. It’s ready for renewable energy. With learnings from across Europe and the UK as well as insights from our own research and development facility, we’re preparing to transform the gas network and ultimately Ireland’s entire energy system to deliver a cleaner energy future.”